Depression, anxiety and mood disorders are very common and debilitating diseases with significant personal, social and economical consequences . Women are at higher risk for depressive disorders when compared to men. Hence lifetime prevalence of depression in women is about 21% as compared to 13% in men. Peri- and postmenopausal years are times subject to many stressors (i.e. family, social, work, health-related, economic and sexual), that seem to increase within this population the frequency of mood disorders. Indeed, more than 70% of perimenopausal women present easy crying, irritability and symptoms of unhappiness, and more than 60% of postmenopausal ones suffer of anxiety, depression and loss of memory. Although the positive effects of red clover MF11RCE® have been observed over menopausal symptoms, vaginal and cardiovascular health, with a promising safety profile, to date the effect of MF11RCE® over female climacteric mood disorders remains to be determined.

Aim of the Study

The aim oft the study was to evaluate the effect of isoflavones derived from red clover extracts (MF11RCE®) over anxiety and depressive symptoms among postmenopausal women.

One hundred and nine postmenopausal women aged 40 or more were randomly assigned to receive MF11RCE® (80 mg; Group A) or placebo of equal appearance (Group B) for a 90-day period. After a washout period of 7 days, medication was crossed over and taken for 90 days more.

A prospective randomized, double-blind, placebo controlled trial was carried out by the Study Center Med XIX, and the Department for Gynecological Endocrinology and Reproductive Medicine, General Hospital, Vienna, Austria. Inclusion criteria were: postmenopausal status (amenorrhea >12 months), 40 years or older, negative pregnancy test, willingness for adherence to the control dates, and to take the prescribed preparations, presenting with moderate to severe menopausal symptoms (Kupperman index ≥15). Women under HT or with a known isoflavone hypersensitivity were excluded. Mean age of the participants was 53.5±7.1 years (Group A 54.5±6.2 years vs. Group B 53.7±7.8 years). No significant differences were observed between study groups regarding basal characteristics.

Statistical analysis was performed on an intention-to-treat basis using SPSS (Version 11.0 for Windows, SPSS Inc., Chicago, IL, USA). Data is presented as means, standard deviations and percentages. Due to different absolute values at the baseline points of the two phases, comparison was performed with regard to the observed changes. Differences between groups for continuous and categorical data were compared with the non-paired Student’s T and the chi-square tests respectively. Changes within each of the treatment phases were assessed using paired Student’s T test. A p value <0.05 was considered statistically significant.

No side effects were encountered after treatment with the active compound or the placebo group. 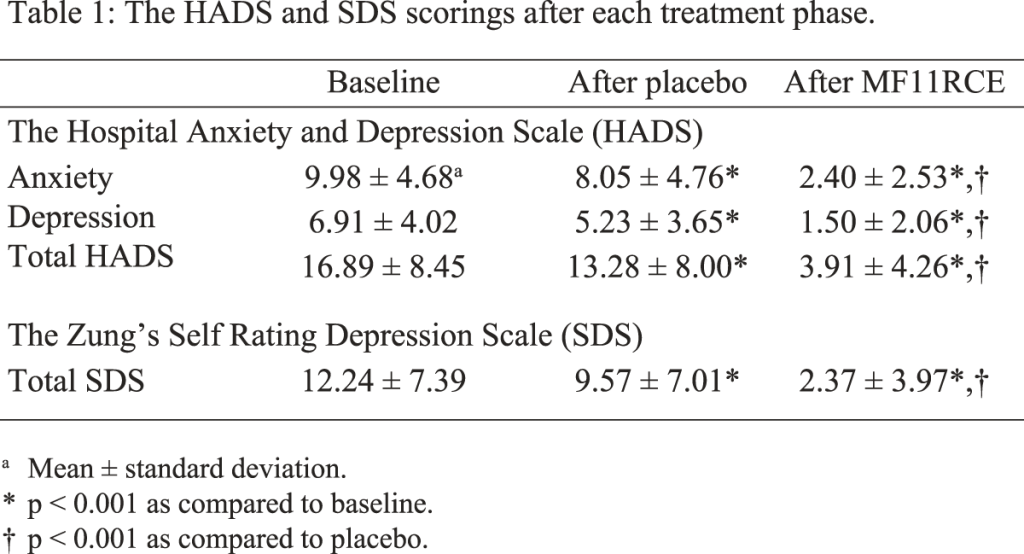 Epidemiological data indicate that women are at higher risk for mood disorders in comparison to men, with an increased prevalence among those peri- and postmenopausal. This situation could be, at least in part, explained by increasing estrogenic deficiency and to the intensity of menopausal symptoms. Among middle aged women, depressive symptoms have been related to the severity of somatic menopausal symptoms.

Finally although clinical data regarding phytoestrogens and mood disorders is still scarce, the present study determined that red clover derived isoflavones (MF11RCE®) were effective in reducing depressive and anxiety symptoms among postmenopausal women.

In postmenopausal women, MF11RCE® supplementation may